Easy bass lines for beginner bass players are just about everywhere. Every band on the planet has some song that have bass lines that are very friendly towards beginners. The lines are intended to be supportive and not lead oriented, the notes tend to follow the chord changes of the guitar player and the lines give the budding bassist a great crash course in the very essence of being a bass player while developing playing chops. Moreover, they can just be fun to play and learn.

The Pixies were a seminal 1990s alternative rock act that helped to shape the sound of many of the acts that we consider to be power players and representative of the Generation X sound. Weezer, Nirvana, the Strokes, Radiohead and countless other high profile acts have all claimed to have drawn influence from the Pixies’ raw sound and soft-loud-soft verse-chorus-verse song structure.

The band’s bass player, Kim Deal, held down the Pixies’ low end for all four of the band’s albums, Surfer Rosa, Doolittle, Bossa Nova and Trompe le Monde before her departure from the band in 2012, 2013. She was a role player and did her role like the best of them. Her bass lines were simple, audible and supportive of the guitar work of Frank Black and  Joey Santiago. She even commented on what she believed a ‘real bass player’ was.

While I could have chosen any Pixies’ song for this list, I chose ‘Hey’ for the reason that the bass line is the center point of the song and it comes in clear and audible in the mix. The bass line is a classic example of a line that doesn’t need to be fancy or elaborate to still hold down the low end and provide body to the song.

Here’s the tab to the Pixies’ Hey’ off their classic album, Doolittle:

I’m a big fan of bass lines with slides worked into them. To my ear, there is just something very satisfying about a gentle slide from one note to another up or down the bass neck. Fortunately, Modest Mouse’s Eric Judy worked a few of those into his bass line for the Modest Mouse song, ‘Tiny Cities Made of Ashes’ off their 2000 album, The Moon & Antarctica.

Judy’s bass line here, like that of the Pixies’ ‘Hey, drives the song. Underneath Judy’s playing, guitarist Issac Brock and company fill in the sonic space with gentle, floating guitar parts and a quiet kick and high hat combo to round out the song.

The bass line is composed of two primary patterns that alternate between one another. Both start on the Db on the E string with the only difference between the two being that the first pattern turns around on an F# and the second one turns around on a B. 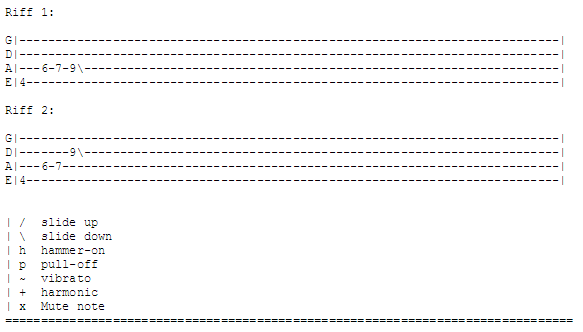 U2 has come to embody a lot of things over the years from stage shows to social activism. But one thing that makes U2 so unique is that musically speaking, U2 is very very simple. Edge even commented that the U2 is a bunch of musicians that don’t sound good individually but together sound very good and simplicity of each person’s musical parts are a big aspect of U2’s sound and ability to stay so musically and socially relevant over the years.

The song ‘With or Without You’ off the band’s seminal 1987 release, The Joshua Tree captures everything U2 in one song: soaring vocals, catchy hooks, delay laden guitar work, and a rhythm section lead by bassist Adam Clayton and drummer Larry Mullen Jr. to keep the whole song stitched together and moving as a coherent unit without ever becoming boring or faded.

Here’s Clayton’s bass line to the song ‘With or Without You’:

Massive Attack makes music meant to chill you out. Few songs ever seem to reach a full explosive peak and most tend to just pulse along in a cool, calming way. Though Massive Attack does tour with a live band to recreate their studio production work, the original productions usually feature a synthesized bass line. Like most of the other bass lines on this list, the bass line to the song ‘Paradise Circus’ off the band’s 2010 album, Heligoland, the bass line is simple yet satisfying and complimentary to the overall musical picture. It doesn’t demand attention but your ear naturally seems to be drawn to it once it kicks in around the 1 minute mark of the song.

If you’re not familiar with Massive Attack, I highly recommend taking some time out to listen to the band. And while you’re at it, pick up your bass and give a try to the bass line: 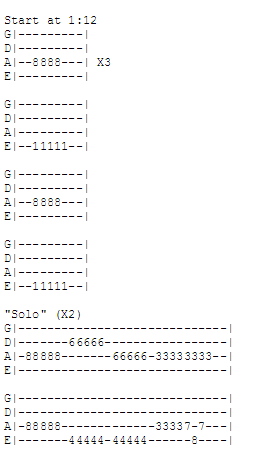 While we’re on the topic of electronic music, let’s talk about one band from Oklahoma that transformed into a bit of an electronic act themselves (or at least electronically influenced) called The Flaming Lips.

Originally a punk band, the Lips’ sound has done a full 180 in the last 15 years. From brash, distorted guitar driven work to buzzing synths and airy vocals the Flaming Lips have reinvented themselves in one of music’s most seamless genre crossing transitions – and none ever seemed to complain or call the band sell outs along the way!

While the Lip’s sound might have changed, the band’s line up has not. Bassist Michael Ivins has been with the band since it first formed in 1983 and been providing the low end support ever since then and the band has only seemed to shed it’s membership throughout the years it was shifting from a Sonic Youth-esque band into more of an Sgt. Pepper’s Beatles sounding one.

The band’s 1999 release, The Soft Bulletin, marks the truly distinct transition from noise to synth and the track, but it was the band’s 2002 release, Yoshimi Battles Pink Robots, that the band fully embraces their new sound. Crossed between a Talatubbies cartoon and an acid trip, Yoshimi is a trip and one of the tracks that best embodies the band’s new found weirdness is track 2: ‘One More Robot’.

It’s a dense little song brimming with a neon-tinted moody atmosphere and dark quivering synths driven by Ivins’ clean punchy Precision bass line. Ivins’ line provides an interesting contrast to the overall picture of the song. While the track is layered and lush sounding, Ivin’s bass line is short, fat and punchy and gives the song a much needed drive. Without it, the song would certainly be considerably less interesting and engaging to listen to despite Coyne’s smooth vocals.

In researching for this piece, I couldn’t get a hold of a tab, but Songsterr does have a full transcription of the bass line available for those interested in learning the song.

When we think of Pink Floyd and bass playing, the first thing that comes to mind is ‘Money’, the song that introduced many of us to a non-4/4 time signature for the first time. But for this list, I’m purposely not going to cover ‘Money’ (too easy and been done to death by everyone and their mother) and take to a different Pink Floyd song: ‘Sheep’ off their 1977 album, Animals.

‘Sheep’ is a 9 minute prog rock song done and composed as only Pink Floyd would: chugging guitars transitioning into psychedelic interludes and back out with more guitars all tied together with a concept from the mind of bassist Roger Waters. The bass work in this track one needs to dig deeper to find – or turn up the bass on your speaker system. It does tend to get buried underneath the rest of the instruments in the mix but when you find it, at first glance, you’re likely to find that the bass line is what we think of as a ‘rock bass line’. It’s entirely supportive, groovy to an extent and the challenge lies in capturing the right feel behind the notes rather than remembering what notes to play.

While ‘Sheep’ is a long song and remembering all the notes that go with all the parts may or may not be a hidden challenge, it’s certainly an easy bass lines for beginners worth investigating especially if you’re a fan of good ol’ classic rock.

Hailing from England, the Arctic Monkeys have brought with them a rough-around-the-edges sound that invokes images of early White Stripes and the Black Keys. While the band could be called a guitar-centric band, the bass playing is certainly there to support the bluesy guitar playing. Another great example of the presence of the bass being felt but not always heard.

The song, ‘R U Mine?’ off their 2013 release, AM, is an example of a bass line that is in (just about) perfect unison with the lead guitar melody – all the way down to the fuzzed out guitar. Again not terribly complex in its difficulty, the bass line to ‘R U Mine?’ is definitely a fun song to play through.

‘R U Mine?’ by the Arctic Monkeys bass tab

Toss out of your head for a moment the typical Fugazi sound. Short, fast songs, in your face lyrics about social activism and anti-government ideas and more energy than anyone would know what do do with and instead replace it with a 4 minute song, with a tempo at about 90 beats per minute and a loud, fat bass line driving the song. You’ve got Fugazi’s ‘Suggestion’. 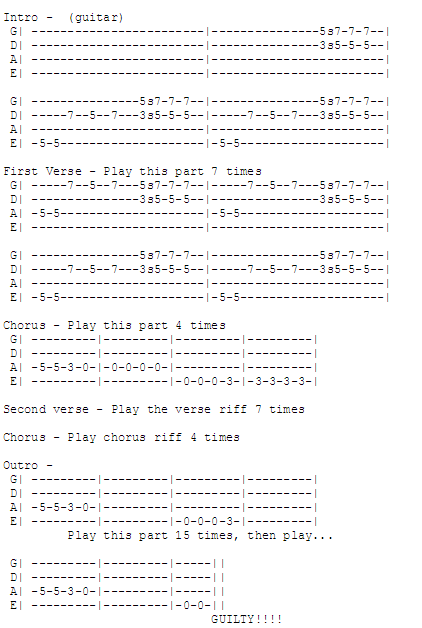 When we think Porcupine Tree, none here has thought ‘easy bass lines for beginners’. Well, as it turns out, there is a song that is simple enough for a beginner bass player to take on from this English progressive rock band: ‘Hatesong’ off the band’s 2000 release, Lightbulb Sun.

Like their progressive rock influences, Porcupine Tree is best known for their technical song writing abilities and concept based albums. ‘Hatesong’ and Lightbulb Sun are different, however.

The album as a whole is seen as some of Porcupine Tree’s most listener-friendly music up to this point in their career and ‘Hatesong’ seems more like ‘progressive metal lite’. The song still carries a prolonged, scripted section leading the song out beyond the 4 minute mark, but the song isn’t quite as wild and crazy musically as other Porcupine Tree songs prior to it like the song ‘Pure Narcotic’ and pretty much the entire On the Sunday of Life… album.

Bassist Colin Edwin, who is also credited as the co writer of this song, lays it down plain and simple for ‘Hatesong’. His bass line is often found following the lead guitar and seldom deviates from the rest of the band, making the challenge  of this bass line two fold:

A third challenge for beginner bass players in this song is the introduction of harmonics. Within the opening 3 minutes of the song, Edwin’s bass playing makes significant use of harmonics in between played out notes. For beginners, this bass line is a fantastic way to get introduced to incorporating harmonics into your playing in a way that is functional and supportive rather than in a lead bass way.

We’ve covered a lot of genres and a lot of styles of music – old and new. From electronic to blues rock to progressive metal, fun, engaging and even challenging bass lines are all around and from every decade and from every walk of music. Hopefully this post shed some light on something new and exciting and put some cracks in the mold of go-to beginner bass songs like ‘Money’, ‘Smoke on the Water’ and ‘Another One Bites the Dust’.