Bass guitar effect pedals can seem pretty daunting. All kinds of brands, models, colors, technical components and thousands of reviews for all of them. How does anyone really get the right information about effects pedals, and how to use them?

Pedals play a big role for bass players. They help to add an additional layer of tone and dimension to our playing. Sure playing clean – or without any effects at all – is one way to go about playing bass, but effects can help you to:

Bryan Beller had an article back in 2010 for Bass Player Magazine where he discussed bass guitar effect pedals and was the basis for this post and this infographic (see below – it’s pretty cool!)

This post is long overdue. We’re going to be looking at bass guitar effect pedals. Specifically:

Think of this post as a reference tool if you’re a seasoned pedal veteran and an introduction to effect pedals for bass guitar if you’re brand new to the art of pedal.

Volume pedals allow players to adjust the volume of their rig from their pedalboard, rather than manually turning down the amp or the bass. Typically, you’ll find volume pedals being used by guitar players for volume swell effects more than you’ll find bassists using them for that reason.

In the bassist’s pedal chain, the volume pedal is often seen being a tool to tune with when used in conjunction with a chromatic tuner where you can then quiet the rig but still have your signal picked up by the pedal chain.

Standalone, volume pedals aren’t tremendously useful. They really do need other pedals to really be useful to a bass player and their pedal board.

A Handful of the Best Volume Pedals for Bass:

Octave pedals are a kind of pitch shifting pedal. When activated in the pedal chain, octave pedals work by splitting your signal into 2 octaves, one clean high and one distorted low one.

When engaged, octave pedals can create an effect similar to a synth pedal and deliver a fuzzed-out, synthesizer sounding effect:

A Handful of the Best Octave Pedals for Bass:

Here’s a sample of a BOSS OC-3 Octave Pedal and what it sounds like in action:

Ever notice how when you turn your music up really, really loud, it starts to get fuzzy and distorted? That’s what overdrive and distortion pedals do – but in a really controlled way.

Overdrive pedals and distortion pedals, well, overdrive your signal by adding more strength into the signal, causing the signal to distort.

Distortion pedals work very similarly to overdrive pedals and many refer to them interchangeably because of their strong similarities in function and tone shaping.

The differences between distortion and overdrive pedals are subtle and can vary extensively or minimally depending who made the pedal and the tone shaping functionality of the pedal. Some claim overdrives tend to sound more “hollow” while distortion pedals tend to sound more “full” and “bottom heavy” but, again, differences between these two kinds of pedals can be very subjective.

At the end of the day, both pedals are designed to add additional gain to your signal to the point of minimal signal clipping (again – a fancy way of saying when you make things really, really loud, they distort and sound fuzzy).

Most overdrive pedals tend to have these controls associated with them:

A Handful of the Best Distortion and Overdrive Pedals for Bass Around:

For bass players playing in hard rock, alternative rock, or metal, distortion and overdrive pedals are certainly something worth investing money and time into.

Ever listen to the Red Hot Chili Peppers? You’ve heard an envelope filter.

Envelope filters and wah pedals work by moving the signal of the up and down the frequency spectrum based on how you rock the pedal. 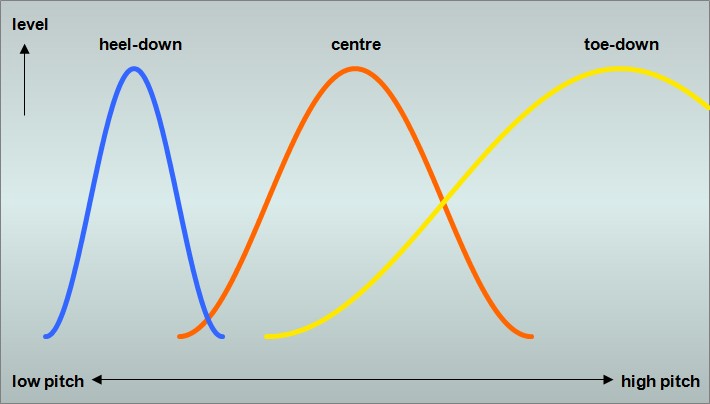 Envelope filters on the other hand provide that same frequency-altering effect, but automatically – hence why envelope filters are sometimes also called auto-wahs.

Auto-wahs work the same way as rocking wah pedals but are, well, automatic. The quality of the wah comes from how much the audio signal changes in volume.

Put another way, all this means is how you play the bass with the envelope filter on will affect how “thin” or “fat” the wah coming out of the amp is.

A Handful of the Best Envelope Filters and Wahs for Bass Around:

Here’s a demo of the Dunlop MXR Bass Envelope Filter. Pay particular attention to how the wah snaps back or “flattens out” as the bass player plays the bass. You should notice that the harder the bassist digs into the bass, the more snap is caused and the less attack he applies, leads to a fatter, wetter wah effect:

Chorus pedals are another kind of pitch shifting pedal.

Like octave pedals (above), chorus pedals work by splitting the guitar’s signal into two: one clean and untouched and another changed. In this case, the second signal is treated with a small amount of reverb and delay, providing that “echo-ey” effect to your bass playing without being a full-blow delay.

Though often overlooked, Jaco Pastorius experimented for a period of time throughout his career with chorus pedals in a small pedal board consisting of a RAT distortion pedal and an EHX delay pedal. The pedals rarely made an appearance when they were, they were showcased during Jaco’s rendition of Jimi Hendrix’s “Third Stone from the Sun”.

A Handful of the Best Chorus Pedals for Bass Around:

If you’ve ever slammed your hand down on a table in a room and heard a slight echo come off the impact sound, you’ve just done the same thing that a delay pedal does.

Akin to overdrive and distortion, reverb and delay are terms to describe a certain kind of pedal and are often used interchangeably. Though there are pedals that are designed exclusively for recreating the reverb effect of the Fender Reverb amps of the 1960s, they are usually wired to be 6-string guitar compatible only.

In the context of bass guitar, delay and reverb are terms that, essentially, mean the same thing.

Most delay pedals do have a specific reverb effect built into them, fulfilling both effects in one pedal.

Delay pedals work by delaying the guitar’s signal a certain amount of milliseconds from the pedal interface itself. Most delay pedals will have these basic control options to them:

A Handful of the Best Reverb and Delay Pedals for Bass Around:

A compressor pedal works by, essentially, “mashing down” the entire guitar signal to even out the highs and low into one, even signal.

This compression of the signal that takes place helps to “normalize tones” that are sometimes lost in the mix because of complex overtones, and it will result in a more articulate sound without compromising much of the quality of the other signals of the entire guitar chain.

This is typically why you’ll find compressors at the end of pedal chains, rather than at the beginning or in the middle.

Moreover, compressors also have the ability to increase the sustain of notes beyond sounds that are normally usable on the instrument.

Ever wonder how a guitar player is able to hold out a single note for a very long time? It’s the compressor pedal, baby, mashing down that super high frequency and extending it outward as a result.

The problem with compressors, however, is that compressors take away the ability to add expression to notes.

Compressors take away that expressiveness in exchange for an increased volume without distortion and sustain of notes.

Because bass is a low-frequency instrument, using a compressor plus other effects runs you the risk of muddying your tone and making your bass just a wash of sound rather than articulate and punctuated.

A Handful of the Best Compression Pedals for Bass Around:

Please include attribution to https://smartbassguitar.com with this graphic. 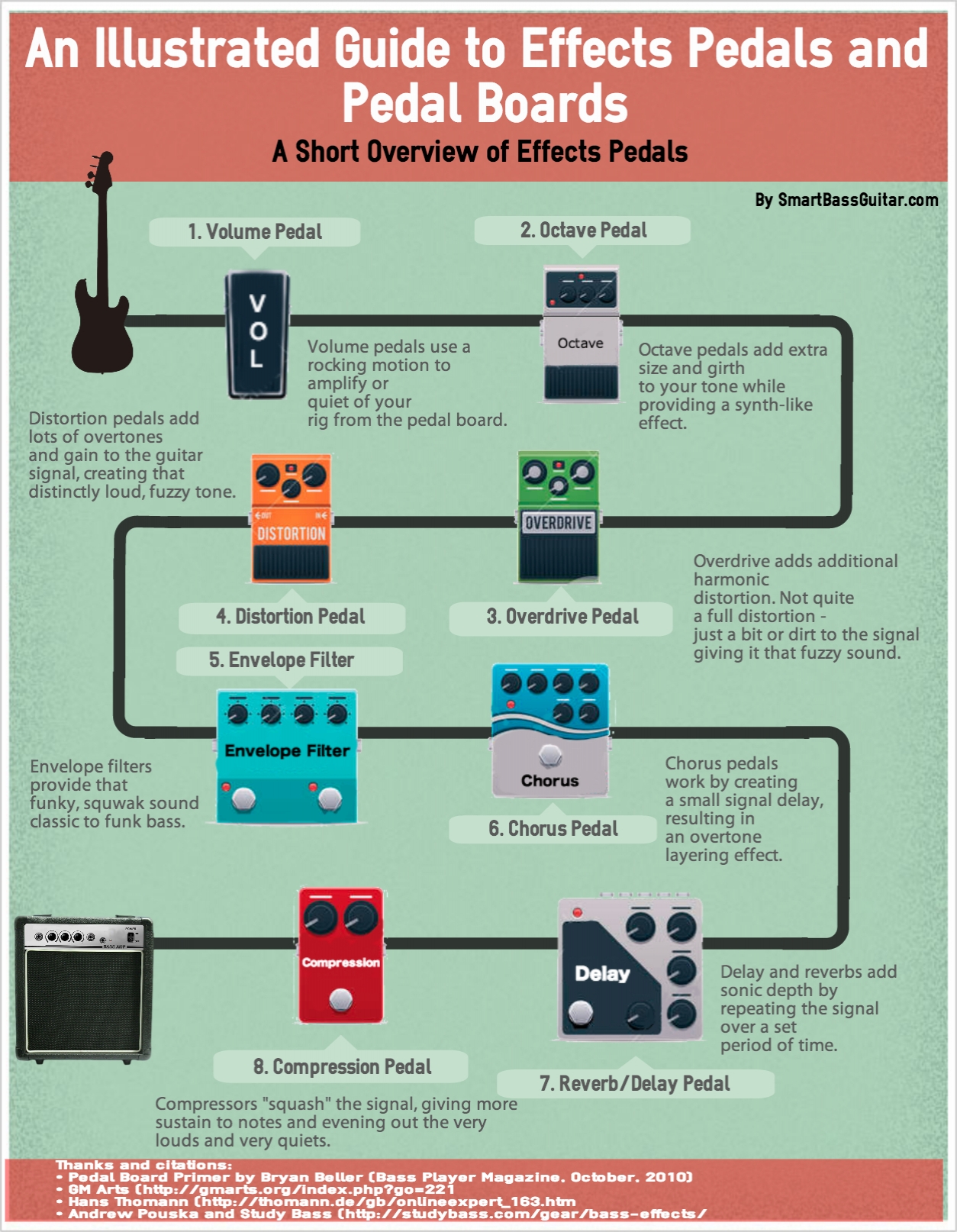